To reclaim means to reimagine and repurpose urban spaces to new and old uses. In doing so we also recognize and acknowledge that the land we farm is part of Treaty 6. Before our grandparents arrived in Canada, this land was used by Canada's first farmers, hunters, fishers, and foragers. We stand in solidarity with those who believe everyone has the right to healthy food, land, water, and air.

Food lover, gardener, husband and pensively absent. Ryan has grown roots to gardening and Alberta that stretch way down. His great grandfather began it all when he immigrated to Edmonton and tried to make a living off of 5 acres in current day Bonnie Doon. Ryan was raised on a small farm at Pigeon Lake, where he competed with his brother to see who could fill the most yogurt containers with raspberries (and won)! Through the Augustana Campus, UofA he traveled to Mexico and Cuba where he renewed his passion for food justice and learned from the best campesinas around.

After farming urban plots for a number of years in Edmonton, Ryan made the move back to his roots bringing us back full circle, he is now growing great veg at his home farm at Pigeon Lake. 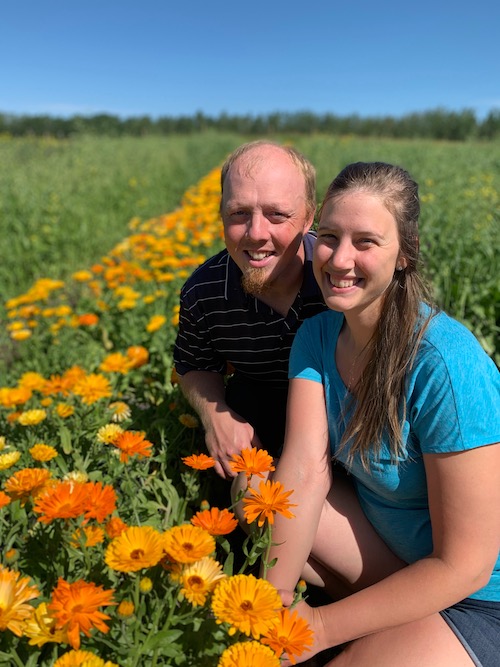 Perfect for Tacos, sandwiches or anything you want to use them on. These bright beautiful radishes make a great add on to top your meal or as a side.

Sunchokes, also known as Jerusalem artichokes, are a funny-looking tuber with a delicate, artichoke-like flavor, and they have been growing in popularity in recent years, popping up at farmers markets and on restaurant menus around the country. But before you go on a sunchoke binge, you should know its unofficial nickname: the Fartichoke.

Calendula infused vinegar not only tastes great, Calendula flowers have a high percentage of flavonoids, saponins and triterpenes, which work together to both ease swelling of inflamed tissue and stave off infection.<br><br>Calendula vinegar also makes a lovely hair conditioner. The vinegar helps hair follicles to lay flat after contact with soap or shampoo, and the calendula gently lightens hair color.

Use this sweet peppery tasting vinegar to make salad dressing, marinades, or splash it on roasted veggies. Combine it with equal parts honey to make a nasturtium oxymel. Or you can use it any way that you would use regular vinegar!

Farmer’s Choice for several years. This thick relish is almost exclusively fennel and adds a unique flavour to sandwiches, charcuterie, burgers and anything you want the sweet taste of fennel to. Not as strong as raw fennel, but keeps its lovely anise taste. Plus the added digestive benefits that fennel packs. Yum.

Pure Relish made in the heart of Garneau, Edmonton. Enjoy a truly premium relish. Serve on hot dogs or in salad dressings, tartar sauce or tuna and chicken salads. Share with your friends and family with joy.

Using our tomatoes, mostly heirloom varieties, this homestyle ketchup is smooth, sweet, tangy and a great change as a BBQ condiment, pizza sauce, or sandwich addition. Has hints of nutmeg, cinnamon and local food. We love it and think you will too.

Kick your sandwich up a notch with this Smoky Scona Relish from Edmontons own Reclaim Organic Farm.

Get your spice on with this organic kimchi. Spicy from chili paste and made from our favorite type of cabbage on the farm. Our Napa cabbage provides a nice crunch and texture to this easy to snack on treat. Shelf stable

Good o’l wholesome kraut. German, polish, ukrainian or just a lover of kraut, this one is for you. We love it on reubens, with perogies, as a side dish or a snack. Plain kraut or apple cumin krout available. Apple cumin kraut gives a nice savoury note to this sour delight. Both styles are pasteurized to be shelf stable.