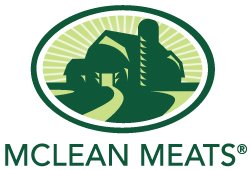 The McLean Meats story goes back over 30 years when company founder Garth McLean moved from New Brunswick to Vancouver and got his first job working in a Federal meat plant and as a truck driver.

As Garth worked his way up into sales he became personally involved in every aspect of the commercial meat industry. Dismayed with all the chemicals and preservatives found in deli meats, he developed Canada’s first nitrate-free deli line called Natural Farms.

In 2003 Garth’s friends Michelle Neilson & Deanna Bell joined Garth on his Vision and together they rebranded the company as MCLEAN MEATS, drawing inspiration from the words “CLEAN” and “LEAN” in Garth’s last name. Their Mission was to produce clean food products that nourish the body while supporting natural, humane and sustainable farming. And it still holds true today. The company tagline, ‘Embrace Food with Gratitude’ was inspired by their mutual love of animals. It serves as a testament to give thanks and acknowledge our consumption of meat.

Staff comment: "Reminds me of the Hot Rods we used to buy at 7-11 back in the not-so-healthy days!"<br> No Preservatives <br> No Antibiotics <br> No Gluten, Dairy, Soy <br> Canadian Farms <br> Humane Certified Pork <br> No Celery Extract, Nitrites<br> Expires within a minimum of 5 days.<br><br> Normal to see white crystallization on outside of pepperoni stick.