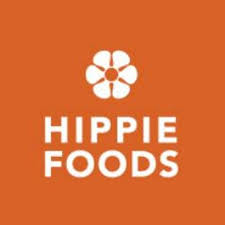 Hippie Foods is a family of healthful snacks made by the folks at Left Coast Naturals, a local B.C. based business that manufactures and distributes an assortment of organic and natural foods. The idea of Hippie Foods originated way back in 2005 when Left Coast Naturals was distributing another brand of tortilla chips. That brand was not selling as well as it should have been, and when our sales reps asked the retailers why, their comment was “Why would this sell any better than the other brands out there – they all taste about the same”. This was a bit of an “aha” moment for us, and we decided there was a different way to make tortilla chips. As we began to play with different ideas, the core concept that kept coming back to us was that there were very few foods made from whole food ingredients that also tasted great. We ended up inventing several new flavours of tortilla chips, and we named them Hippie Chips because they celebrated that 1960's movement of eating natural foods and keeping real, whole foods in our diet. Our entire company believes in doing what’s best. This includes the way we do business. We embrace the quirky collection of individuals that we are, all while having fun! We don’t just work together – we genuinely care about and support each other, and want to help each other grow personally and professionally. Our commitment is not just making great food and serving our customers, but also to doing it in an ethical and environmentally responsible way.Today, Left Coast Naturals has a fleet of trucks, a 32,000 square foot warehouse, and a 10,000 square foot production facility. We distribute nearly 30 brands, nearly 200 organic and natural bulk foods, and manufacture two of our own brands: Hippie Foods and Left Coast Bulk Foods. We’re also the first distributor in North America to have a formal non-GMO policy.

Hippie Granola is food worth waking up for. Made from nutrient dense organic grains, nuts and seeds instead of filler oats. No oats? That's right! It just gives us more room to pack in the good stuff. It's a granola that everyone can feel good about. Enjoy Hippie Granola for breakfast or snacking on the go.

Plant-Based. Non-GMO. Gluten Free. 5g of Protein per Serving. Fist Ingredient: Avocado Our Avocado Crisps bring real, straight-from-the-source avocado to you in a convenient, crispy and delicious snack. Seasoned with sea salt, seeds and herbs, these crisps give you all the creamy avocado flavour you crave, with the crunch you deserve. Now that’s a real snack!<br><br> Baked with real avocado, pumpkin seeds and a touch of cayenne pepper means these plant-based crisps give you all the zesty Guacamole avocado flavour your crave, with the crunch you deserve!

With a sprinkling of cranberries and papaya, these seed and nut snacks deliver a balanced sweet and nutty flavour with an irresistible crunch.

With a touch of Himalayan salt and black pepper, these seed and nut snacks deliver a nutty and subtle onion flavour with an irresistible crunch. Our Organic Seed & Nut Clusters are nothing but real organic nuts, fruits & seeds seasoned with sweet & savoury natural ingredients. Now that’s a real snack!