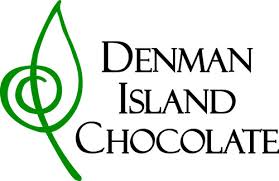 Denman Island Chocolate, located in British Columbia's beautiful Gulf Islands, was created in 1998 by Daniel and Ruth Terry. Long interested in the organic food movement, the Terrys left the big city for Denman Island in 1994, looking for a more rural lifestyle in which to bring up their two sons and thinking of starting a market gardening business.

Finding that a great many of their fellow islanders were already self-sufficient in vegetables, they turned (as ever) to chocolate, a shared love that dated back to their search for the perfect fuel while bicycle touring in northern France.

Ruth died in 2004, but we continue to make chocolate the way she would have wanted us to. We are Canada's organic chocolate company and we bring you the best.

The chocolate that goes into all our products is made for us in Europe. It has a signature smoothness, along with a cocoa richness not found in generic chocolate bars. The resulting combination makes for a not too sweet intensity that defines the true chocolate experience.